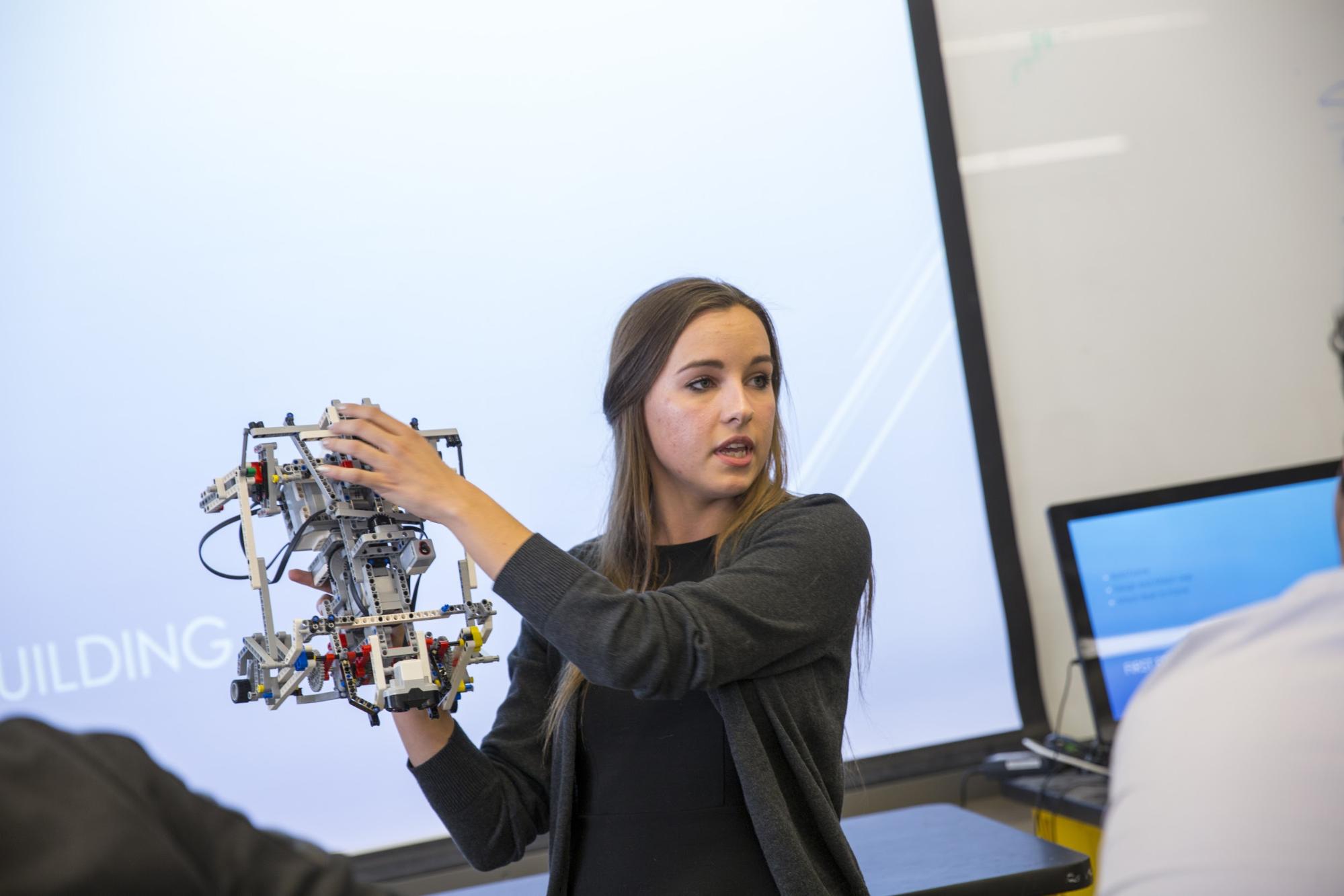 Case at a glance

The vertical integration of EGR 101 and EGR 102 was the focus of Shankar Ramakrishnan's Spring 2017 KEEN Professorship (Shankar Ramakrishnan and Deana Delp, “Vertical Integration of the Freshman Experience to Instill Entrepreneurial Mindset”). Dr. Ramakrishnan was the coordinator for both courses. In spring of 2017, there were five sections of EGR 102, with most class sections structured so that lectures are followed by design activities. The course teams have not delivered a lecture on EM using the specific term “entrepreneurial mindset,” but they teach its principles of the 3Cs throughout the course and have integrated EM via the KEEN framework into the design tools students use to complete the projects.

EGR 102 has two projects, the first the redesign of the EGR 101 project, then a second instrument project that culminates with a concert of the whole class playing a song on programmed instruments.

This integration effort began with the EM workshops for faculty and lecturers that marked the beginning of phase one of FSE’s EM integration initiative, which focused on integrating EM into both core and elective courses up and down ASU’s engineering curriculum. That training began with the School of Biological and Health Systems Engineering (SBHSE) and the Polytechnic School, the latter being home to the EGR 101 and 102 sequence. As the EGR 101 lecturers who were trained on EML did, the EGR 102 lecturers revised course design projects to explicitly address creating value for the customer and to encourage students to discover customer needs through customer or other stakeholder interviews and research.

In EGR 101 and 102, the affected project is titled “Redesign the Future.”  Students in both courses engage with the same problem and the same user, but EGR 101 students design using wood or 3D printing (their prototypes have no movement), while EGR 102 students take the solution and automate it. During the ideation stage of the project in EGR 102, students meet with 101 students to discuss their designs and the basic prototypes they created, what they liked and did not like about them, as well as initial design ideas that they explored. Based on these interviews, EGR 102 students create and eventually present improved functional prototypes to the EGR 101 students.

Key to this integration effort was revising the class schedule for the vertical Integration of a single project between two classes, as well as revising and developing new course materials, including project handouts and lectures. Also key was figuring out the logistics of setting up teams and matching teams across two classes.

The milestones below marked this integration effort’s progress:

NOTE: Supporting resources for this case study can be found within its companion KEEN card (link below), which is also where the community can discuss the case and its broader topic.

The first version of the vertical integration project was implemented in spring 2017 and was considered a success based on both student and instructor feedback. Further implementations are needed to finetune the project based on student feedback. The EM team administered its student mindset survey with these students and further progress in that workstream will help to determine the specific mindset outcomes of this integration effort.

We will also continue implementing the survey/reflection assignment. We are not yet sure when we will begin using the term “entrepreneurial mindset.”

Throughout this integration effort, we had the benefit of receiving feedback from senior faculty and often were collaborating with like-minded faculty. There are, predictably, administrative challenges associated with setting up teams and matching teams across two classes. We found that flexibility in course scheduling is key. We also found it helpful to have help ordering prototyping materials and making other purchases.

Although students’ presentation of their work is treated as an event, with photos taken of and videos created for each team, we have not been able to include these great projects in the Innovation Showcase held each semester on the Polytechnic campus, where lack of space and the number of upper-level teams prevents including the exceptionally large number of freshman teams from also presenting.